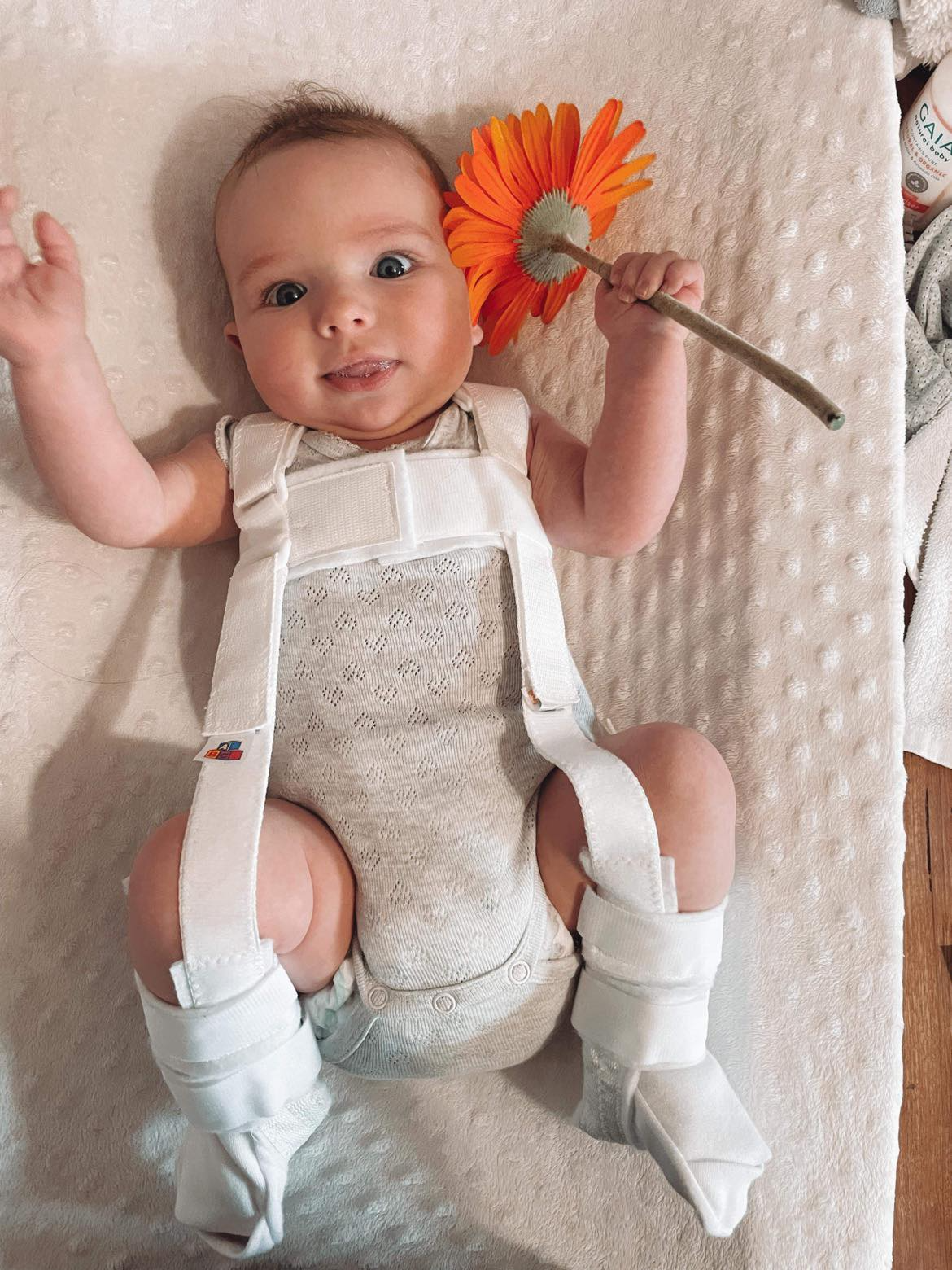 When Olivia was born, she was perfect. When they placed her next to me to run through the routine checks, everything was great, a slight click in her left hip was detected but nothing to be concerned about yet.

At her 8 week MCHN appointment, our nurse mentioned that Olive had uneven thigh creases which can sometimes be a sign of Hip Dysplasia. I had never heard of Hip Dysplasia at this point and honestly didn’t think too much of it.

We ended up having her first ultrasound a week later to check if there was anything going on inside.  The first ultrasound showed a few concerns about both Olivias left and right hip. The results were sent off to our GP and we would need to discuss the results to determine what happened next.

On the 25th June we were sent off for a second ultrasound and it was this appointment we were given the shattering news that Olivia had confirmed Hip Dysplasia. Her left hip had moderate dysplasia, whilst her right hip was classed as severe. Her right hip socket hadn’t formed at all, meaning her right hip socked was completely dislocated. 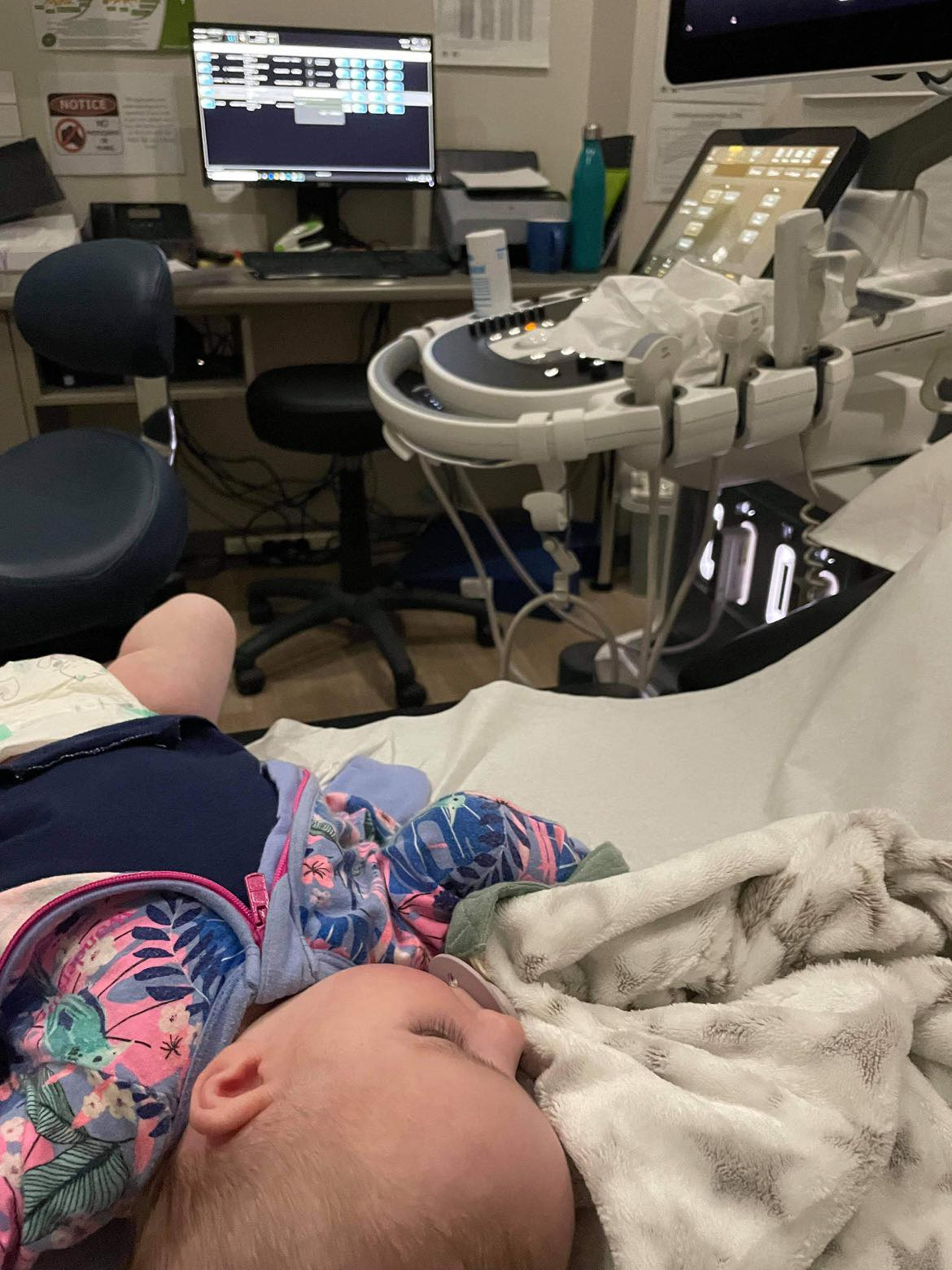 A week later we had our next consultation with a GP to run through the results of the scan and referred to an orthopaedic surgeon to come up with a game plan. It was all feeling very real at this point and we had endless questions - was she in pain? Would she need surgery? Would she need treatment for weeks, months, years even? How were we going to navigate this new challenge when being a first time parent was enough of a challenge in itself? I remember receiving a copy of the referral letter to the orthopaedic surgeon a few days later. All I could see on that page were the words “severe” and from my hours of googling, I was sure that meant Olivia would require surgery.

On the 7th July we had our first appointment with the surgeon. To our relief, Olivia would be fitted with a Pavlik Harness rather than surgery straight up. We would see if there was any improvement, however small, after 2 weeks in the harness and that would determine what would happen next.  We were booked in for a harness fitting at the hospital and I began researching to find out what we would need to make Olivia as comfortable as possible. How would she sleep? Could she continue in her car seat and pram? What could she wear? I ended up joining an amazing support group on Facebook (Hip Dysplasia Australia Group) and learnt so much from other families going through the same situation.  Olivia was fitted with her harness on the 12 July. We were quickly shown how to put on and remove the harness. We were allowed to take her out of the harness for 1 hour every day. 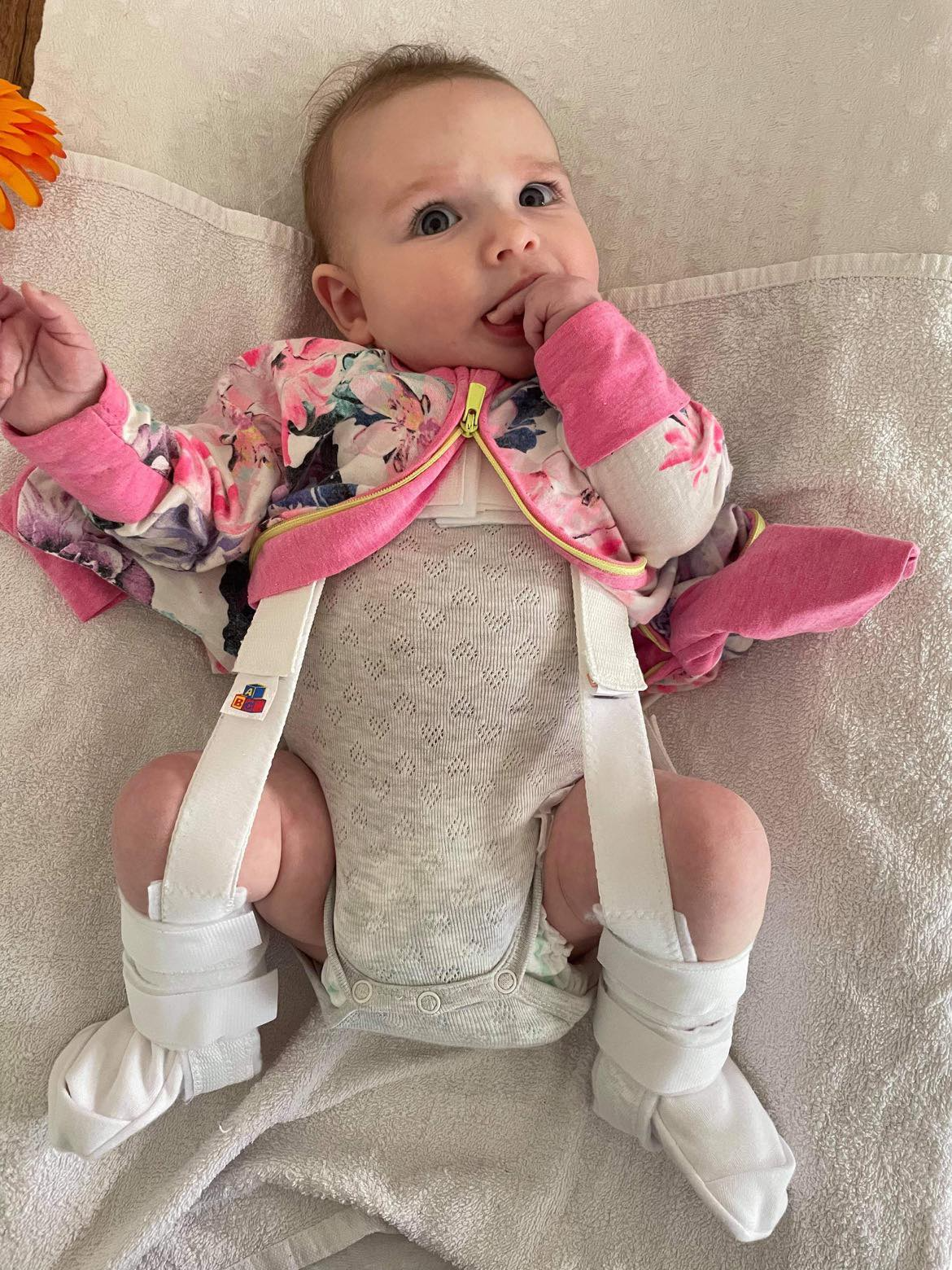 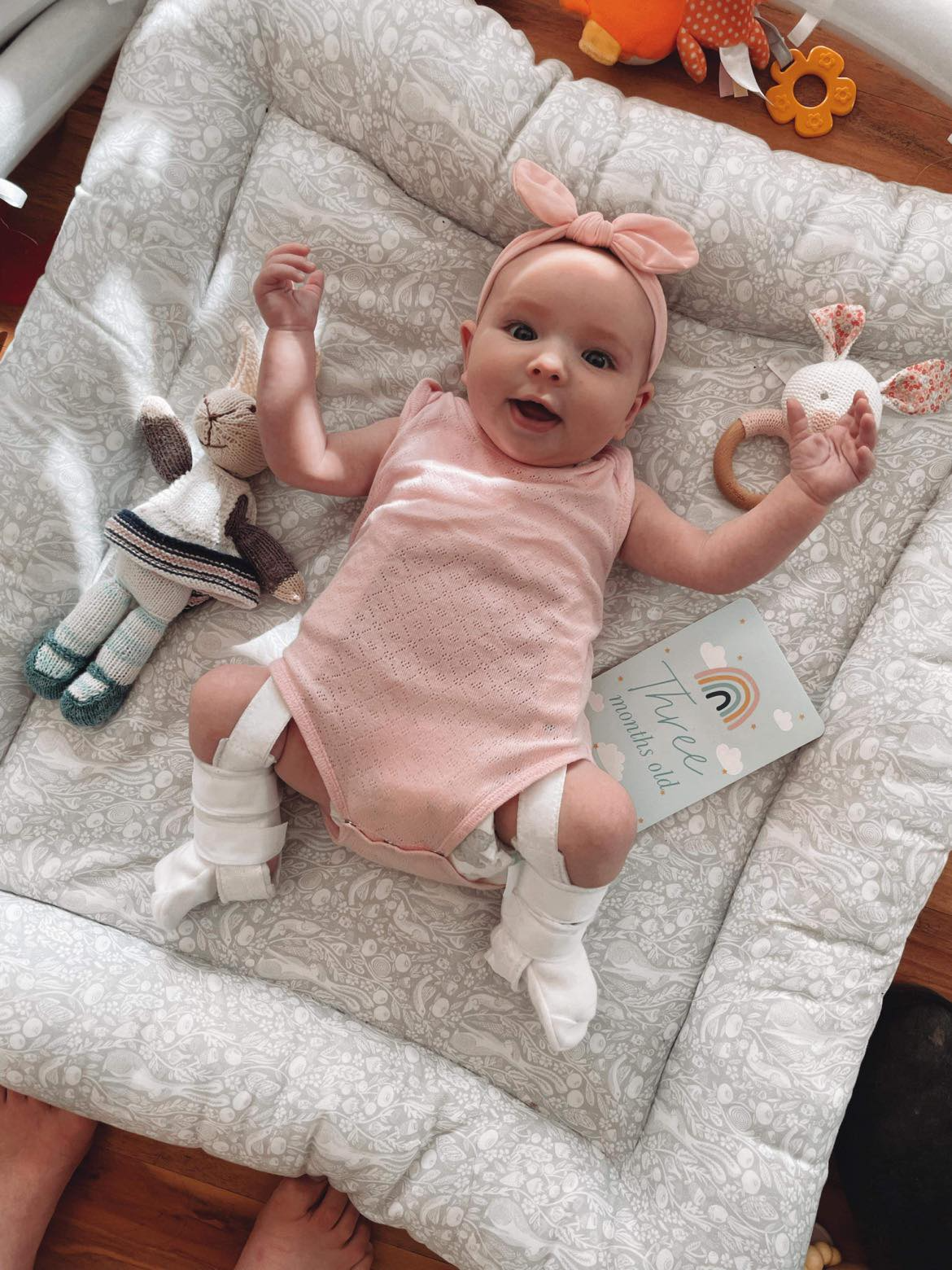 The next few days were overwhelming to say the least. Olivia honestly adjusted to her new accessory much quicker than we did. After a few months of getting to know our baby, we now had to relearn how to do everything in a different way. The harness had to stay on during nappy changes, I couldn’t cuddle her to sleep or while feeding, I found I could only dress her in oversized onesies and not the cute clothes I had been so looking forward to dressing her in.  Olivia loved her bathtimes out of the brace, but hated when it was over and she had to go back into her brace. We ended up going some days without taking her out at all as it was heartbreaking every time we had to put her back in.

We battled with rashes from the brace and unsettled nights while she got used to her new position. Eventually everything became easier and our new way of life just became our normal. We laugh now about how easy nappy changes actually became and in a way, we preferred having the brace on as it kept her legs up and away from any explosions!  After 2 weeks we were told there had been slight improvement in Olivias hips and we had avoided surgery for now. We would continue with the Pavlik harness and have regular 3 week ultrasounds and consults with our surgeon. Months down the track, her hips continued to surprise us. The harness was working it’s magic and we saw continuous improvement. Our determined little girl even learnt how to roll whilst in her harness!

When Olivia was 7 months we were given the amazing news that Olivia’s hips had improved so much that she would be coming out of the brace. She was declared Hip Healthy and our resent scans have shown that everything is still within a healthy and normal range. Soon after the brace came off, she was sitting and rolling and at 14 months she is now walking like she never had an issue.  We feel endlessly grateful that signs of Hip Dysplasia were picked up from the moment she was born. Treatment began quickly, which we believe was such an important part in her recovery - along with the support of our family and friends, and closely following the treatment plans given to us by our surgeon.

A Hip Dysplasia diagnosis can be scary, devastating and a big life adjustment, but it is incredible how quickly you will adapt as a family. We found it wasn’t widely spoken about and having never heard of Hip Dysplasia, it felt incredibly isolating at first. There are many families going through the same journey, and reaching out via support groups is an amazing way of gathering advice and venting with those who know firsthand what you’re feeling. 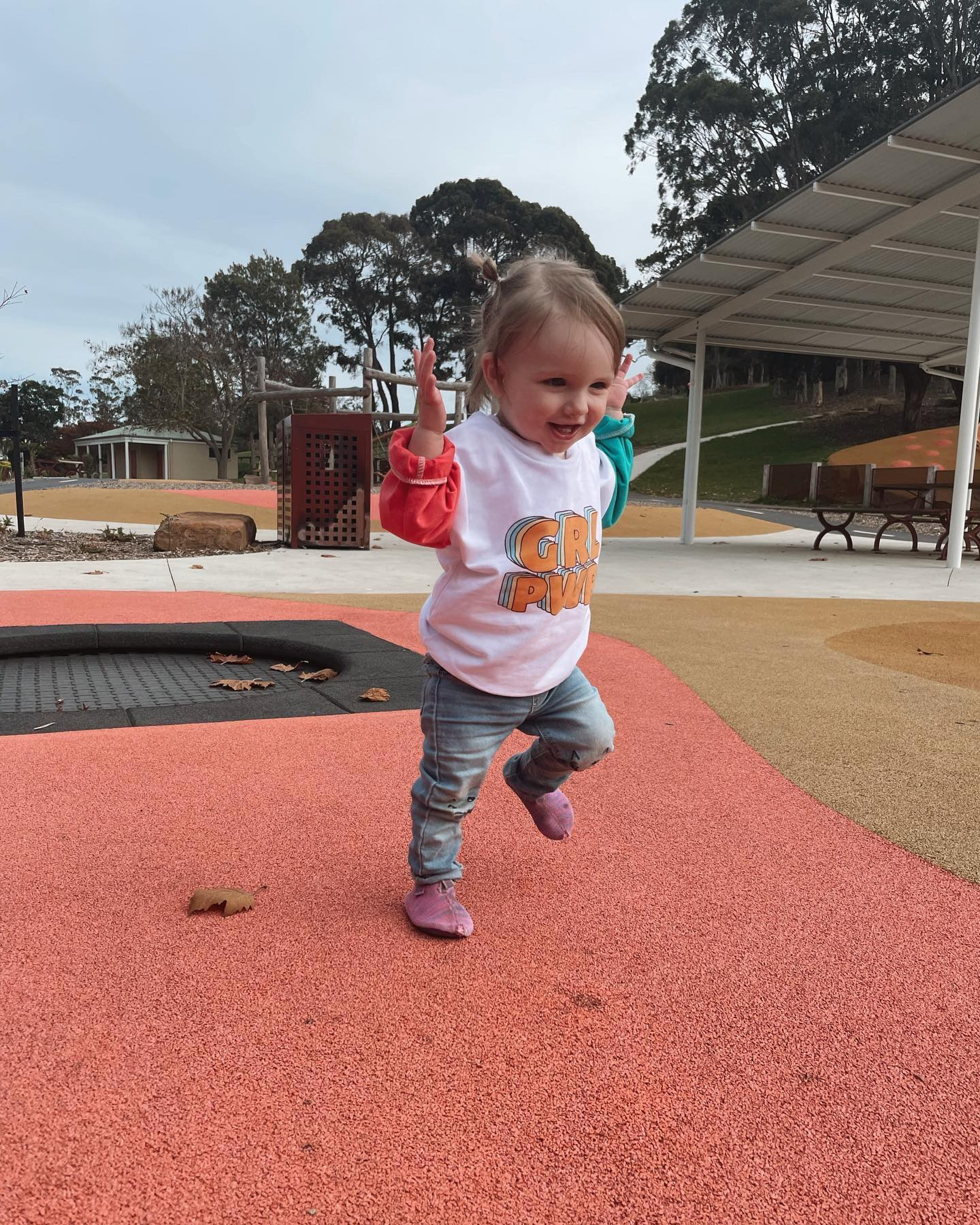 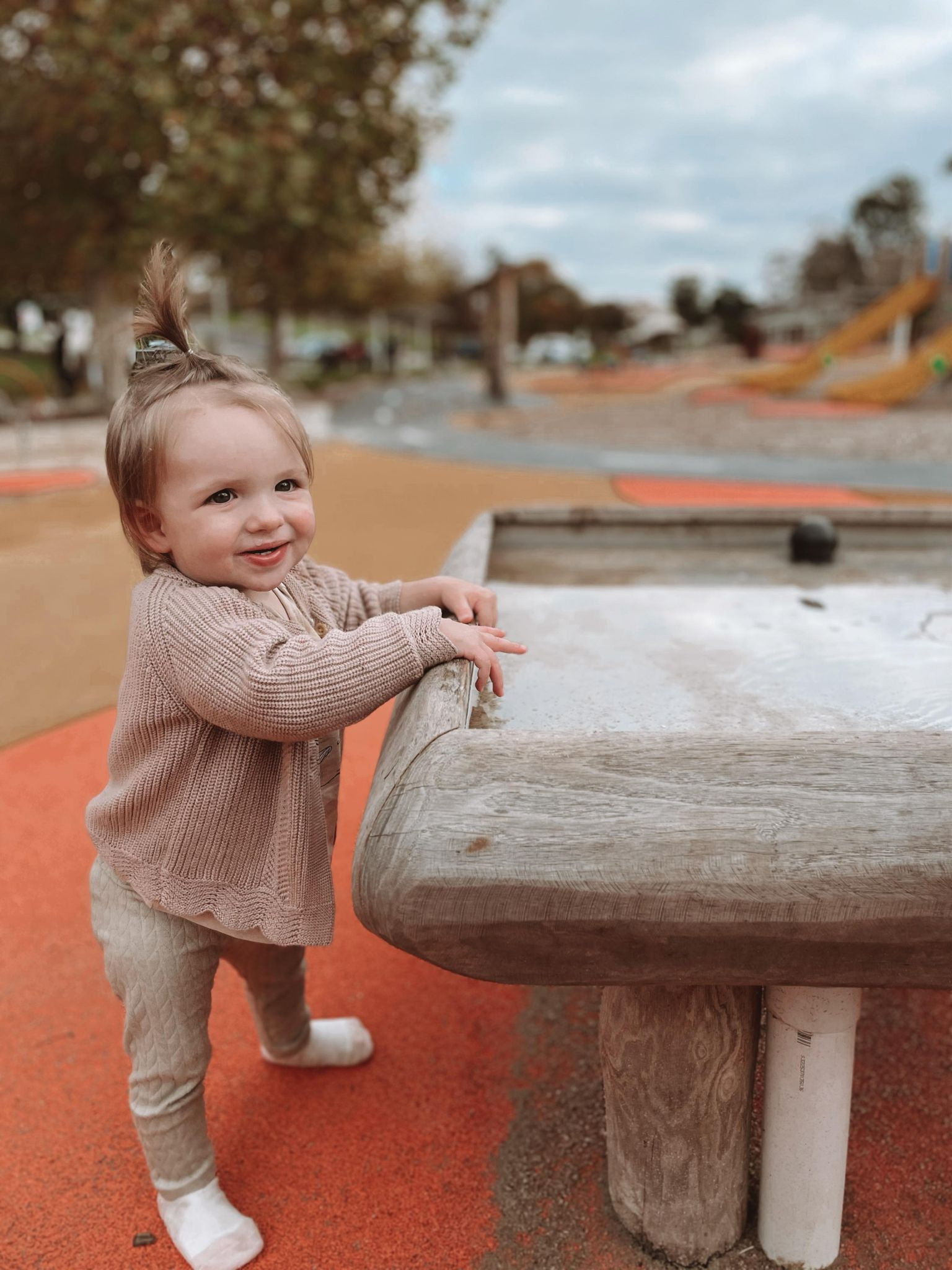 I have loved following your Instagram page, and learnt SO much more at your course.
Our presenter was INCREDIBLE, and very knowledgeable. Thank you

I hope I never have to use the skills I learned, but I am so glad that I did the course. I recommend it to any expectant parent.

Being a new parent is stressful in itself but being confident in knowing what to do in different situations is so reassuring! Our presenter was incredible and so passionate

I feel so much more prepared and ready should we have any more accidents in future. Honestly don’t wait until something happens to do it, do it now and be all over it before you need it.