The births of my two children could not be any more different.

My firstborn, Fletcher, was induced at 41 weeks with a ROM and Syntocin. He was posterior, and I ended up with an epidural with a total labour time of 14 hours.

On pushing, he went into distress, the vacuum failed, and he was delivered via forceps. Fletcher’s head was flexed, and he was 4.05kg. I ended up with a 3b tear. Fast forward two years and three months, we were awaiting the arrival of our second child.

The week before my due date, I had basically no signs or symptoms. I was sleeping well, and I had only one day of mild cramps and no other signs. I have an irritable uterus, so from 20 weeks, I experienced Braxton hicks multiple times an hour every day.

During both pregnancies, my babies like to sit posterior. During this pregnancy, I used the spinning babies “Daily Activities” as my focus instead of any other “labour-inducing activities”. It was definitely in the back of my mind that I would have another posterior labour that would start and stop.

At 39 and 2, my obstetrician did a stretch and sweep. I wasn’t overly optimistic about it as I had them with my first with no success. Though for 1-2 hours afterwards, I was getting contractions that were strong enough that I had to flip to all fours when I was laying down, then they just stopped. The next day the same thing happened again. The pain of the contraction was the same pain as when I was around 6cm dilated with my son, and I was confused about what was going on.

After that, I felt deflated and was convinced that my body does not like to go into labour on its own.

On 13.11.21, I woke feeling really comfortable and well. We went down to the Cairns Esplanade for smoothies. I decided to have a nap. When I woke up at 3 pm, I had very mild cramps. At 4:30 pm, some contractions started but were not painful enough to stop me from making zucchini brownies for my son.

At 5:30, it was my son’s dinner time, and I sat down with him to eat, and my contractions completely stopped. When we were at the dinner table, my husband said, “oh, you are probably disappointed that they stopped?”. You can just imagine the look I gave.

At 6 pm, they started up again, but they were really intense. I put on my tens machine ( the best invention ever). My contractions were erratic, anywhere from 5-7 minutes apart. When the contraction would come, I would lean over the bed, and when it would finish, I would keep on packing my hospital bag. We were googling when to go to the hospital, but I wanted my husband to do my son’s bedtime routine and then go to the hospital. The way the contractions were, I felt I must be at least 6cm, but in that same breath, I was in denial that it was actually going to happen.

At 7:00, we went outside to look at the moon as my son was fascinated with looking at the moon each night. Tom watched me breathe through my contraction and decided to hurry Fletcher inside to bed. I stayed outside for a few minutes looking at the moon. It was surrounded by pink cloud. I later looked up the moon phase, and it was a Waxing Gibbous and every month, when I see the moon at that phase. It brings back these beautiful memories.

At 8 pm, we decided to ring and let the hospital know that I was in labour and that we would come in half an hour. My contractions were still all over the place, and I was still unsure if it was established labour.

My son wanted one last cuddle, and as I put him in the cot, I had a really strong contraction. This time I felt I needed Tom’s support, so I grabbed his forearms whilst having the contraction. I said goodbye to my Mum and had another two contractions by the time I got to the car. I got in the car and closed my eyes, and told myself to relax and let my pelvic floor soften.

Two minutes later, I started shaking uncontrollably. I thought to myself, “I must be in transition?” Just after I had a contraction, I asked Tom to pull over so I could jump out of the car and breathe through the next contraction. They were intensifying. Luckily we only live 4kms from the hospital. We pulled up out of the front of the hospital. By the time we got to the birth suite, I had three more contractions, where I would grab Tom’s forearms, but I couldn’t lean forward anymore. I had to stand upright for them, and I was silent still.

As we walked out of the lift at 0830pm, I asked Tom to text our birth photographer Emm. As soon as I walked into the birth suite, I had a contraction, but out of nowhere, this deep groan came over me (on reflection, I was bearing down). The lovely midwife Ingrid (honestly the best midwife you could ask for) goes, “Maybe we should just check you are not about to have a baby”. After the contraction, Ingrid gained consent to do an internal and exclaimed, “Oh wow, you have a big bulging bag of membranes, and you are fully dilated! I’m just going to get another midwife in and call your doctor.

Ingrid offered me to go up on my knees on the bed and the gas, which I was happy to do. In between contractions, I was lucid enough to tell Ingrid my medical history and that my perineum needed guarding due to my third-degree tear. Ingrid asked me to go on my side for that reason. My waters exploded, and I felt a great sense of relief and a shift in pressure.

My doctor walked in, and I started to push. My birth photographer just made it into the room on my last push.

I was pushing for 5 minutes, and her head came out. My doctor said, “ Oh hello darling, your baby is facing upwards”. Then at 2053 (23 minutes after arriving at the hospital), Tom helped Edie out and passed her to me. My first words were, “Hello, that was very, very quick”. Her cord was short like Fletcher’s was, and I couldn’t get her any higher than my belly button. My membranes were ragged, and the placenta was not intact. 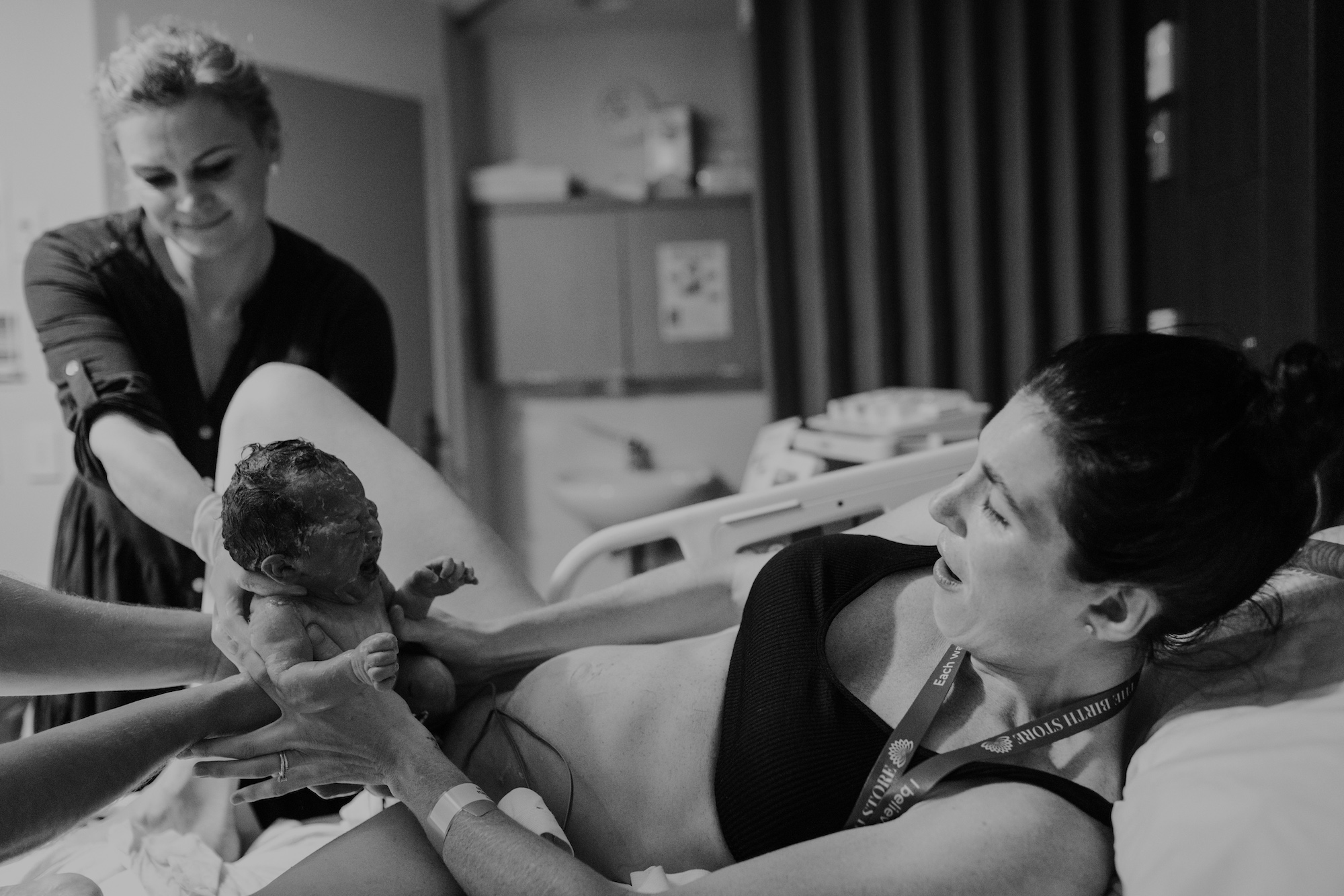 My obstetrician asked if she could try removing it in the suite opposite to theatre. I was 100% on board as I wanted to avoid OT. She tried three times while I used the gas, and I didn’t feel anything. After some time, our little girl Edith “Edie” Marion was measured. She was 3.4kg, 52cm tall and had a head circumference of 34cm. Edie weighed 650gm lighter than her big brother. It just goes to show that the second baby isn’t always heavier.

I had a second-degree tear that my obstetrician sutured, and I can’t even remember happening.

I was amazed by the difference between birth with an epidural and a medication-free birth. I felt no pain whilst pushing, and I would 100% do it medication free again. I was on such a birth high for two weeks after. I felt amazing after Edie’s birth. My husband couldn’t believe how different the two births were. The births of my babies were both so special.

Though Edie’s calm intervention-free birth was such an amazing feeling that I feel so fortunate to experience. 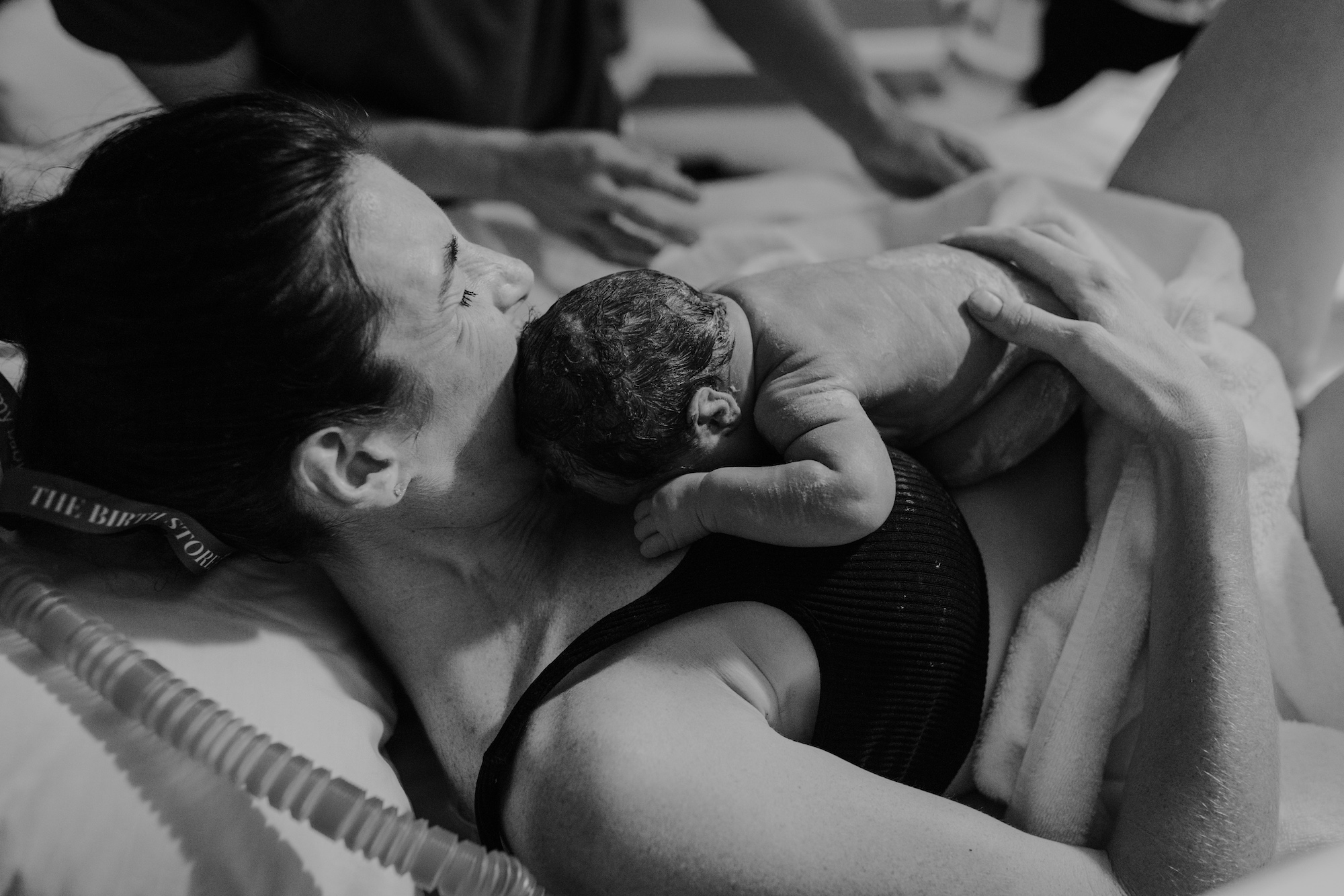 15 Things You Didn't Know About Your Pregnant + Postpartum Body