I’ll give a bit of a back story. I had a very high intervention birth with my first. After realising that none of what happened would have happened if I was left alone to let my body do its thing, I was set on doing everything I could to have a more positive birth this time. Being rural, my local hospital only takes low-risk women and often has no doctor there, so you can’t actually birth there and are sent an hour and a half away to a bigger hospital. This was stressing me out because I had never had a spontaneous labour and therefore didn’t know how long it would be, when I would leave, if we would make it, and I didn’t want to spend that long labouring in the car.

I mentioned these things to my midwife, and she said it sounded like things could be starting to happen, and in my head, I was thinking I would have the baby by the end of the week. Jokingly I said to my midwife as she left our house, “go and have a nap. I’ll see you tonight.” We both laughed it off, but little did I know that she knew I would go into labour that night. As the day went on, the period-type pains hung around, but they were nothing more than that, so I got a little excited but not too much. We actually set up the birth pool that morning as well because Brodern was home for the day, and I organised the rest of my home birth supplies, which I had been putting off. We took our daughter and the dogs for a walk that afternoon, and the pains started to have more of a rise and fall feeling. But they were still super mild and not consistent. I cooked dinner that night and put Riley to bed. I remember thinking this would be the last time I put her to bed before the baby came. I don’t know what made me think that because I was still convinced that I had 2 or 3 days to go, it must have been intuition. 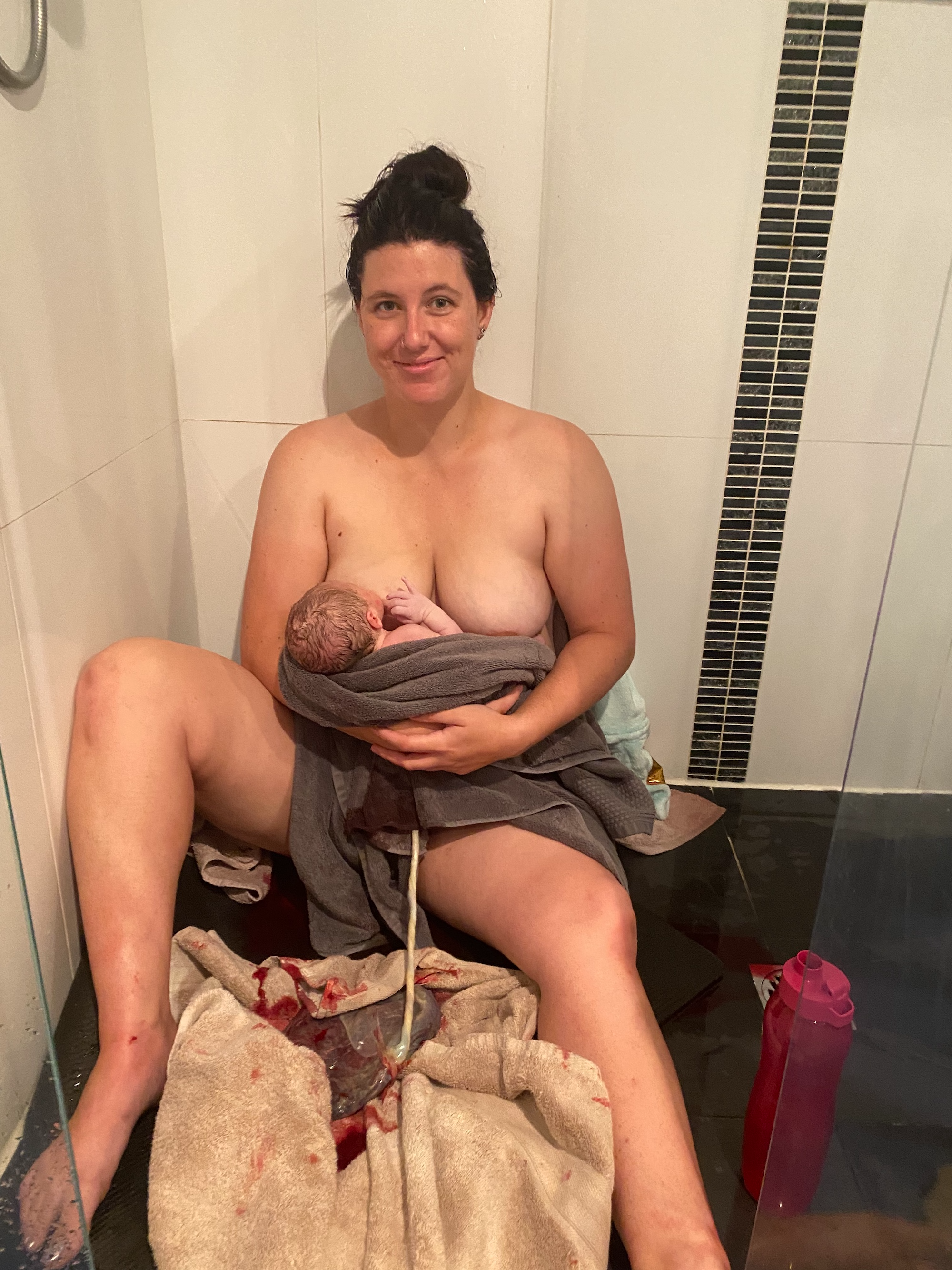 I sat on the ball and bounced while Brodern and I watched some tv, and then I decided I needed to go to bed. Well, the pains started to come every 10 minutes while I was trying to sleep, and they were enough to bother me, but I managed to have maybe an hour of rest. I got up to go to the toilet at about 10-10:30 pm and lost some fluid, so I thought I should probably let my midwife know what was happening since I hadn’t updated her again after the appointment that morning. Brodern decided to come to bed thinking I would probably have some pains throughout the night but nothing major until maybe the morning or the next night. I kept having what I didn’t realise were contractions every 10 or so minutes whilst trying to sleep, and they started to get enough that I had to breathe through them. It got to about 12am, and I got up to go to the toilet, where I lost some more fluid and decided I wasn’t going to be able to lay down any longer.

This is when I started really having to concentrate to get through the contractions, and once I was out of bed, I managed to have about 3 all in a row really quick. It had come on hard and fast. I started feeling sick, so I went and vomited in the toilet, and I knew that was a sign for me that things were getting real. I told Brodern to message Di, our midwife, to let her know that my pains were more frequent and intense and that I had vomited. While he was typing the message, the contractions just kept coming one after the other, and I needed him to help me through them, so I said maybe we needed to just ring since it had been 15 minutes since we first tried to send the message. Di heard one of my contractions and let us know that she was going to get ready to leave. She lives about 40 minutes away, so we thought we still had plenty of time. This phone call was at 12:38 am. 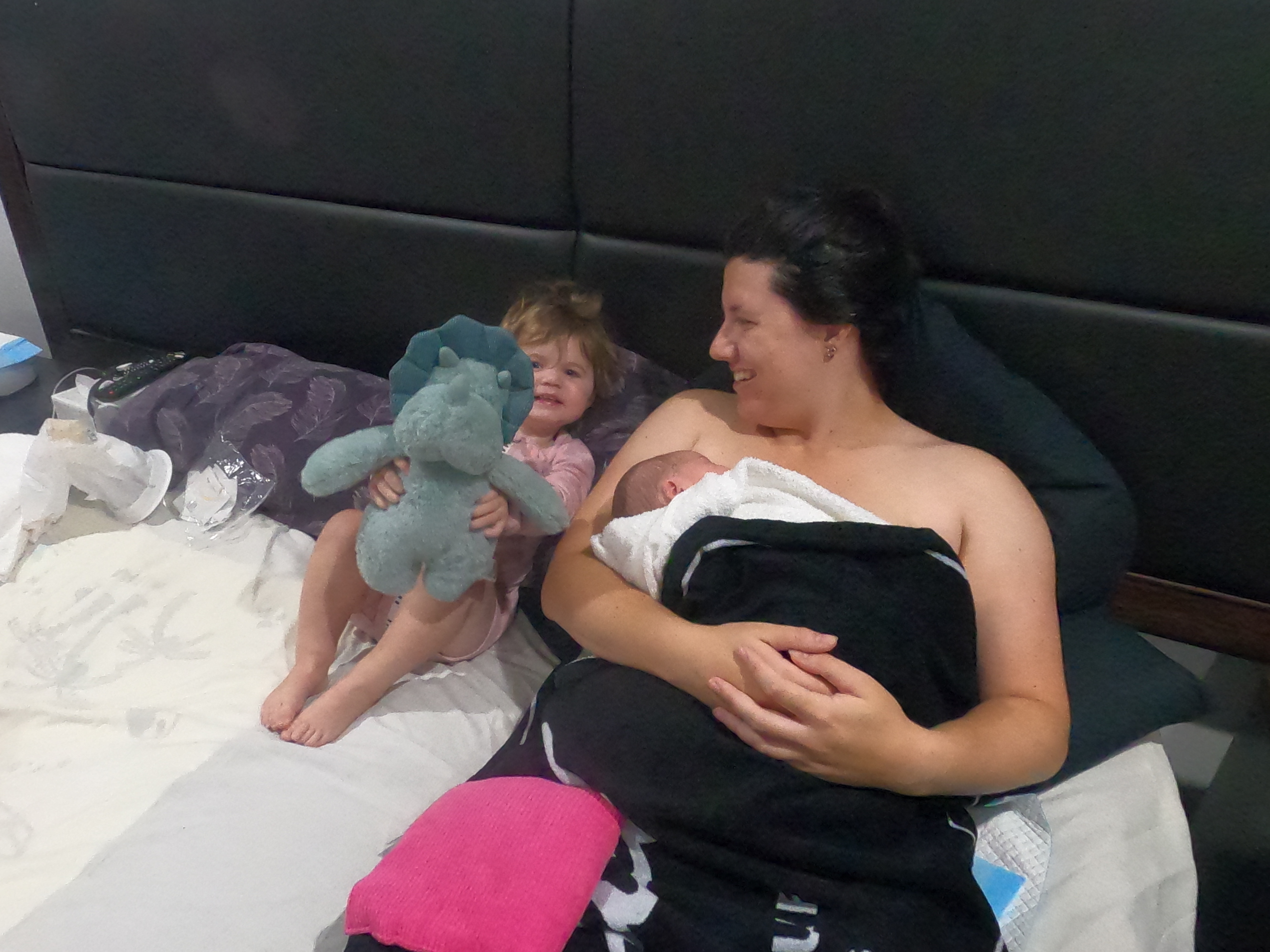 The intensity was ramping up, and I thought I still had forever to go, so I tried the TENS machine, which of course, neither of us could figure out how to use in the moment. Brodern had the instructions, I had the remote, and we were both trying to work through the contractions, so I just kept turning it up, which didn’t help. Heads up if you plan on using a TENS to test it out a few times before hand! I got frustrated with it as it wasn’t providing any relief anyway - turns out I was already transitioning - so I said to Brodern “fuck it get me in the shower.”

At this point, I had no concept of time and felt like I had so much longer left to labour even though things were happening so quickly. I jumped in the shower, and the water provided some relief, but the contractions were starting to roll into each other, and the pain was so intense that I started thinking I couldn’t do it. I thought, how on earth am I supposed to keep going like this all night? This is only the start of labour. True transition style, I started to cry and doubt my capability, but Brodern was incredible and reassured me that I was doing amazing and strong enough to get through it. I got on all fours then in the shower and started vocalising out of nowhere. It just came naturally and helped me get through each surge. At this stage, it was 1am, and Brodern had called Di again to see how far away she was because he could see I was struggling. Di said she was still half an hour away and, when she heard me in the background, told Brodern that he needed to hang up and call an ambulance because the baby was going to be there before she was. 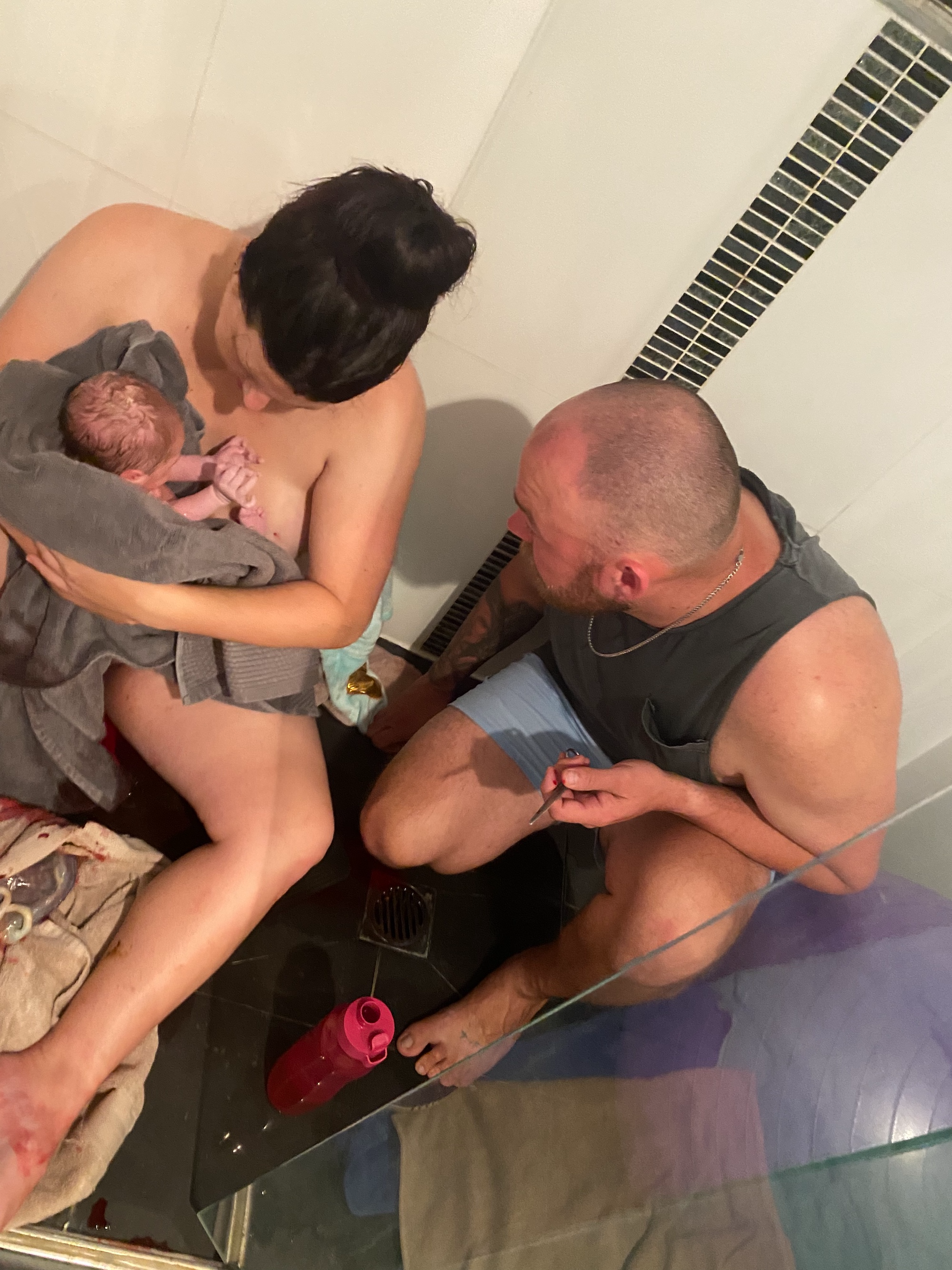 I think this moment was a shock to him because it was only the two of us with Riley asleep in her room, and no one else was going to make it in time. The 000 operator was so helpful, she stayed on the line the whole time and coached him through what to do whilst I started to push. I didn’t experience the fetal ejection reflex, but I had an intense urge to push, which I knew I needed to follow. Baby’s head came down and nearly out and then all the way back in 2 or 3 times, and the relief when it went back in was incredible. I wanted to stay like that forever. The operator told Brodern that I had to get the baby’s head out on the next push or I would have to try a different position, this gave both of us the motivation we needed. I used all of my strength to push on the next contraction. Connie’s head came out, and within the next breath, her body just slid straight out. The pressure and feeling of her head coming out was so strange and definitely not what I had planned for, she came out all at once in one massive push, and I definitely did not breathe my baby out like I had been practising for weeks. Brodern caught our baby, whose gender we didn’t know and shouted, “it’s a girl!” Amongst the chaos, I realised that we hadn’t taken a single photo of the labour or birth like I had wanted to. So I shouted at Brodern to take a photo. Such a raw and beautiful moment.

The operator told us that it was 1:18 am and congratulated us on the birth, letting us know that the ambulance was still about 15 minutes away. I held her up to my chest and just sat there in awe at what we had endured. She had a tiny cry but then just tried to sleep while we waited for the placenta to come out. Brodern called both of our parents to come over, because all I was worried about whilst pushing, was that we needed to have someone here in case our Riley woke up and needed us.

Time felt like it stood still as the 3 of us sat there soaking in what had just happened, this magical moment between Brodern and me as we welcomed our second daughter into the world. Getting to meet this beautiful human that had been growing inside me for so long, she was perfect. Everyone arrived at the same time, around 1:30am; Di, both sets of our parents and the paramedics. Everyone popped their heads into the bathroom to see us and say hello, then left us alone to cut the cord and move Connie and me out of the shower and into the bed. Riley finally woke up once she heard all of the commotion of people in our house and was more excited that she had all of her grandparents to play with than the fact that she had a little sister. 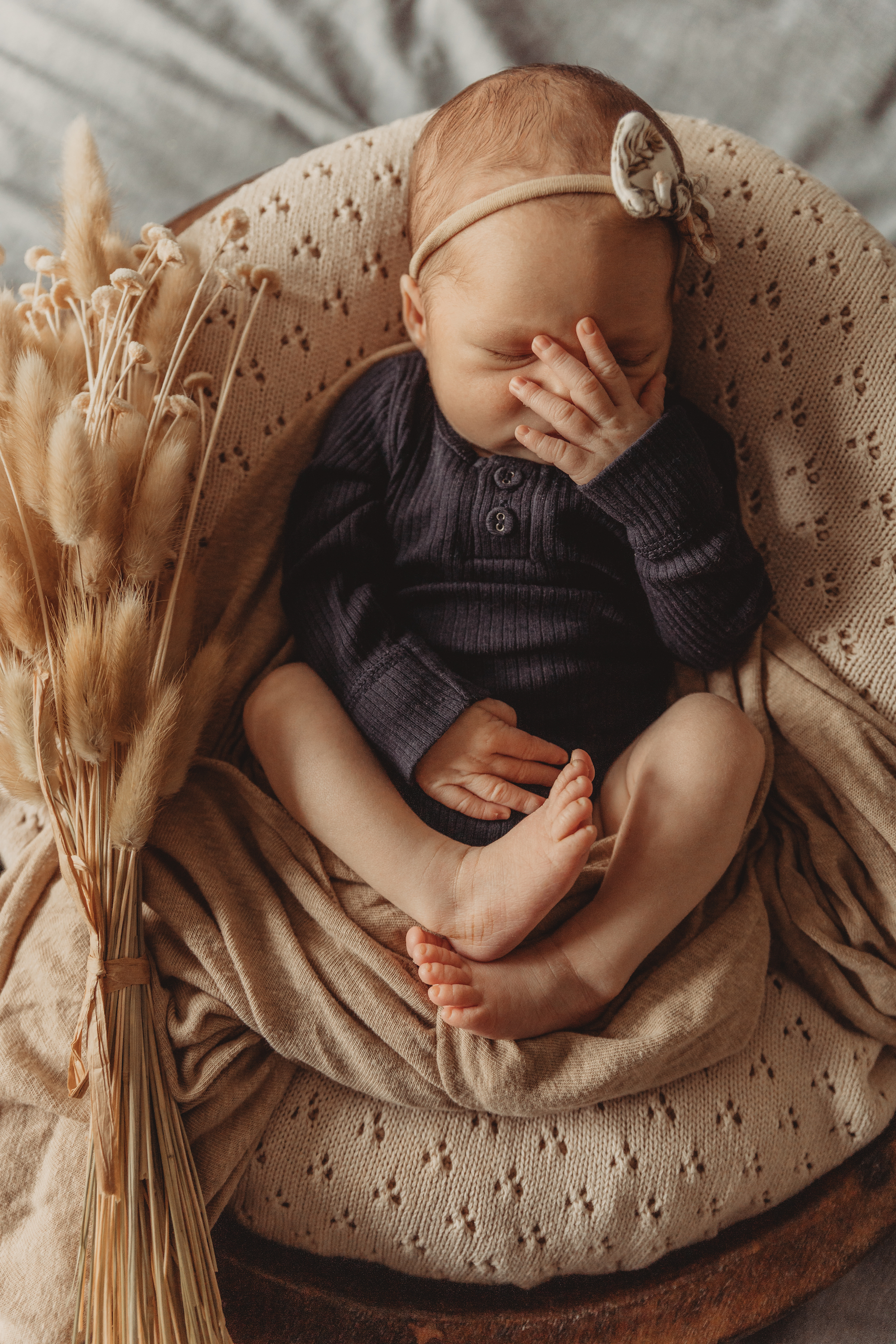 I had a 2nd-degree tear and some slight grazes from the quick delivery, so I got stitched up while everyone played and talked to Brodern about the ordeal we had just been through. It was so nice having all of our family together straight away, and in our own home, we lay on the bed, and all talked while Di checked us both out to make sure we were alright. Everyone left at about 5:30, and we all went to bed for the morning.

I honestly can’t believe how quickly things went from nothing to baby being here. Brodern was so amazing and kept me in check when I thought it was all going to come crashing down. He stayed strong and ended up being the only person I needed with me to birth my baby. I think we were both in a little bit of shock at how things turned out as it most definitely was not the calm endurance event that we had prepared for, but we did it, and we did it together, and I’m so proud.

Also slightly annoyed that I put in so much effort getting affirmations, massage oils, labour snacks, cheat sheets Brodern on support techniques and the birth pool set up for us to not use a single one of them!

I have loved following your Instagram page, and learnt SO much more at your course.
Our presenter was INCREDIBLE, and very knowledgeable. Thank you

I hope I never have to use the skills I learned, but I am so glad that I did the course. I recommend it to any expectant parent.

Being a new parent is stressful in itself but being confident in knowing what to do in different situations is so reassuring! Our presenter was incredible and so passionate

I feel so much more prepared and ready should we have any more accidents in future. Honestly don’t wait until something happens to do it, do it now and be all over it before you need it.